This guide will show you how to approach training a Triton with several different specs.

You can purchase it for 140,000 Doubloons and it initially comes in a Statuette Form: 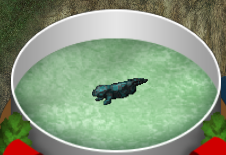 Double-clicking the Triton Statue will "break" the statue, releasing a Triton pet that will instant-bond with you. You must have real GM taming and High Seas in order to use the statue. Once you use the statue, it disappears from your character. 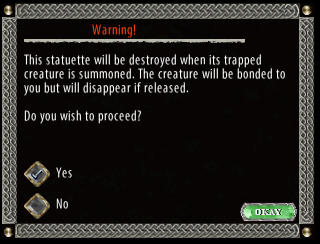 The Triton pet can be traded to anyone with appropriate Animal Taming Skill, so long as they have High Seas.

Tritons cannot be put on Magincia Stable Vendors since they are a summoned pet.

Tritons will disappear if you attempt to release them.

Tritons can spawn in a fairly wide range. Unlike most other pets, a low intensity Triton is still an incredible useful and powerful pet, due to them having no innate Magicals or Abilities that use up Intensity.

Full spawn range details can be found on the Triton Bestiary page.

Due to their large spawn range and overcapped skill ranges, it is not uncommon to see Tritons fall in the 40%-60% range quite often. We even have several Tritons that rate as sub-30%.

However, Tritons are incredibly capable pets. A sub 30% Triton can still build into an extremely powerful pet, as we will show you in this guide.

There are a few considerations to take when training a Triton:

You will not be able to get the standard 700 Str / 150 Dex / 370 Int build for the Triton's Primary Stats, due to their overcapped Dexterity.

You want to make sure you increase Strength to 700 first and then increase Intelligence to its cap after that.

If you increase Intelligence first, you may run into the Attribute cap and not be able to get 700 Strength.

Tritons spawn with overcapped Energy Resist (85-90), which means this will eat into ther 365 Total Resist allocation.

You need to keep this in mind when giving your Triton resists. If you "autopilot" the Resists during training, you may end up with an awkward Resist spread you did not intend to have, due to reaching the Resist cap earlier than usual.

Some sample Resist spreads, based on 90 Energy resist:

These are not the only resist spreads a Triton can get, they are just a few examples of sacrifices you need to make due to the high Energy Resist.

If your Triton has lower than 90 Energy Resist, you can put more into the other resists that are lacking.

Resisting Spells is so high that you will never need to scroll this skill, saving you 20 training points and a lot of money on scroll cost.

Wrestling can spawn in a range from 110 to 130. You may need to scroll your Triton if it spawned with less than 120 Wrestling, however at most it will cost you is 100 training points (due to 110 being the lowest possible Wrestling). This saves you anywhere from 100 to 200 training points and can potentially save you from having to purchase an expensive Wrestling scroll.

Tritons are a Magical pet, and can train any of the standard Magical Abilities.

They are not classified as Necromantic, and cannot get Necromancy or Necromage.

Here are a few examples of a Chivalry/AI build with different rated Tritons along with a link to their planner:

Do not toss those low rated Tritons, they are still incredible pets! As you can see, even the lowest rated Triton can still have an outstanding Chiv/AI build with room for customization.

It's hard to mess up a Chiv/AI Triton. Here are a few build order tips:

Role: A mix of AoE and Single Target Damage.

Description: This is a spec a lot of tamers are wanting to try on the Triton. It is a very point heavy spec, but most Tritons can still achieve it. You may have to make certain template changes on a lower rated Triton.

So again, don't toss those low rated Tritons and don't get discouraged if you have one. A 19% Triton can still get this extremely expensive build.

Note how similar this build is to the 19% Triton. That's because the 50% Triton has 127.5 Wrestling, which adds a lot of Intensity to the pet. This showcases that you cannot judge a Triton purely on its % rating, but rather you need to look at the individual stats and build out a test pet in the Pet Planner.

We strongly recommend putting your Triton into the Pet Planner before taking on this build, as you may have to make compromises along the way. You don't want any surprises in the build that suddenly ruin it for you, so make sure you plan it out!

This build could be interesting, but it will most likely suffer from ability bloat and not perform as well as you are hoping. Specialized builds will always perform better than bloated builds.

Description: This build is designed around purely support via tanking and debuffing your target. Discordance will reduce your target's Skills and Resists by 28% (at 120 skill), and Conductive Blast will reduce the targets Energy Resist by half. This can really do a number on Energy Resists, making way for some heavy Energy Bolts, Chain Lightnings, or Death Rays.

Since the Triton does 50% Energy Damage, this will also allow the Triton to hit harder by debuffing its own damage type.

This build is essentially the same as the Chiv/AI build, you are just giving the pet Discordance/Conductive Blast instead (an even cost-for-cost trade).

It's hard to mess up a Discordance/Conductive Blast Triton.

We recommend not adding Armor Ignore to this build, as it will take Mana and Ability rotation away from Conductive Blast, which you want a high uptime on as a support pet.

You could add Armor Pierce, which further increases all damage done to the target by 10% (the more people attacking the target, the more effective this ability becomes).

Description: This build is designed purely to tank damage at all costs. Pair this with weaker pets to allow them to do damage, or to lessen the burden of healing the pet in order to do more damage from the tamer.

This build is super straight-forward and any Triton can make it. We recommend a High Wrestling Triton for this build, which will allow your pet to defend again more attacks.

It's hard to mess up this build.

The idea behind this build is super simple. A very high uptime on Feint, fighting against a single target. Feint, High Wrestling, Healing, and High Hit Points will make for a very powerful tanking pet.

As tempting as it may be, do not add Armor Ignore or any other abilities to the pet. You want Feint and only Feint to be used as much as possible.

The Triton is a very versatile pet with many different build options. We will continually add new build options to this article as they develop over time. The above builds are in no way an inclusive list of all the builds a Triton can get, just some common ones to get you started.