Forest of the Dark Event Guide

This event is built around the concept of an Oracle event, but with the new dynamic system put in place in Publish 109.

This event also includes a dynamic Champion Spawn which you can do without completing the quest.

*** SPOILER WARNING ***
This guide contains spoilers for the entire oracle quest!
Do not continue if you prefer to complete this on your own!

An Oracle Event is a self-paced quest where you must locate various NPCs throughout the world with clues provided by other NPCs you have found. You discover information from these NPCs by holding conversations with them by triggering their keywords.

Keywords for Oracle NPCs are often their Name or text provided in a previous conversation with that NPC or a different NPC.

In the Forest of the Dark Oracle Quest, the keywords are presented in ALL CAPS in the conversations. If you see a word in CAPITALS, try it on the NPC to progress the conversation.

You must close out of any open dialog gumps before trying a new keyword.

The Quest starts with an NPC named Jaana the Druid outside the Yew Abbey.

Approach her and say her name "Jaana" to start the conversation: 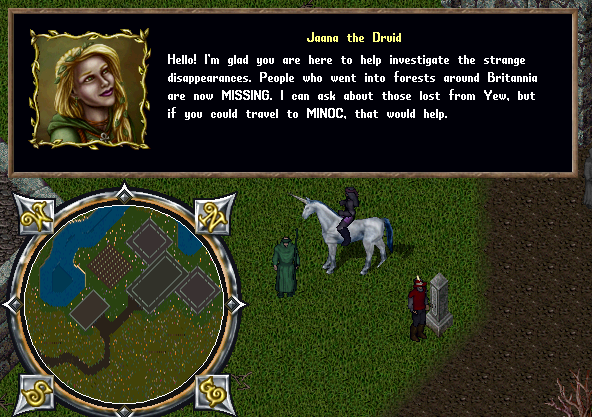 From the dialog you can see 2 keywords to try, "MINOC" and "MISSING", each providing more clues for you.

That's all the information you can glean from Jaana. It sounds like you should investigate the Matewan guild house in Minoc.

Heading to the Matewan Guild House in Minoc, you will find an NPC named "General Burnside". 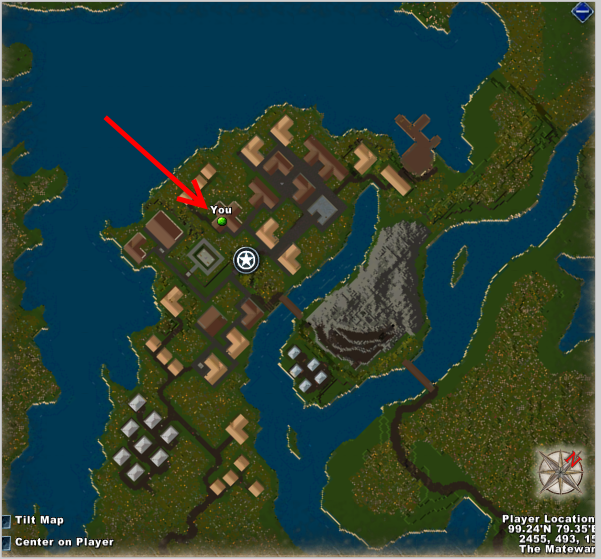 You can trigger his conversation by saying his name "Burnside": 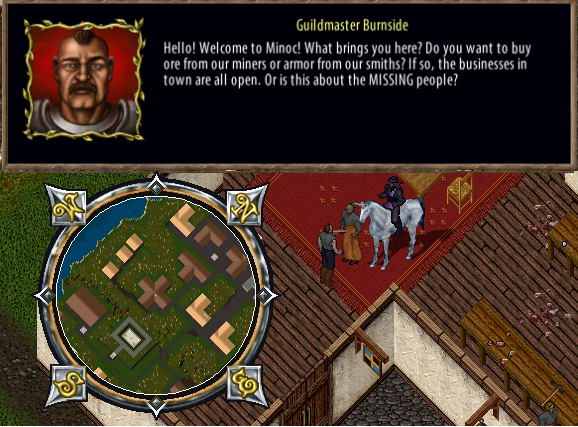 Just like Jaana, continue on the conversation by using the keywords in CAPITALS.

Time to find Merida at the Trapper Huts and investigate sightings of strange Monks near the Vesper Bridge.

Merida the Tinker can be found at the Trapper Huts, located far to the South of the Sacrifice Shrine: 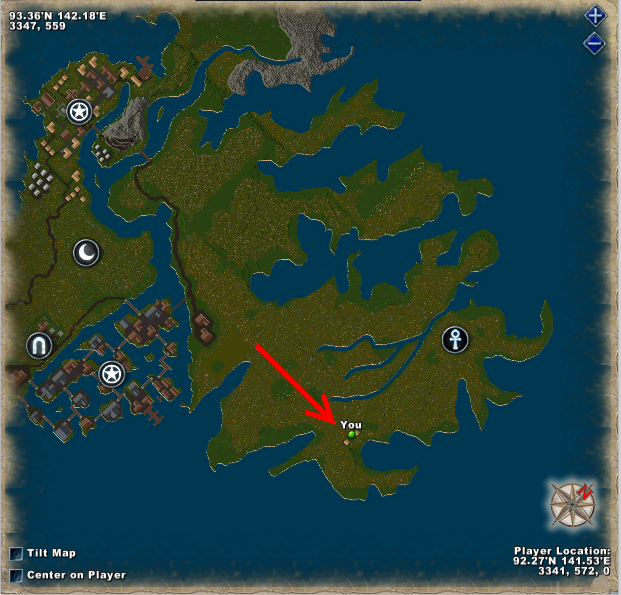 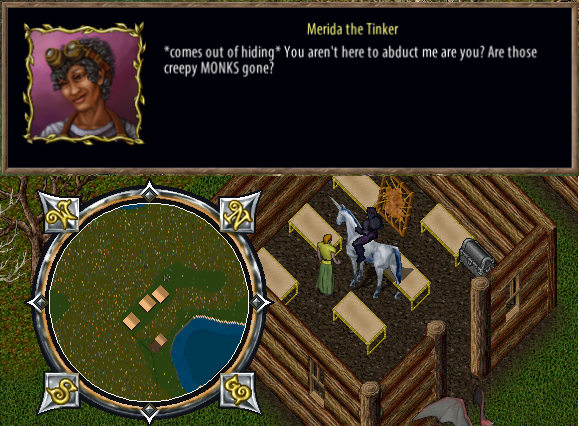 Not much to go off of. Better investigate these Dark Monks Merida speaks off, the clues provided by General Burnside should help.

The Dark Monk can be located at the bridge to Vesper from Minoc: 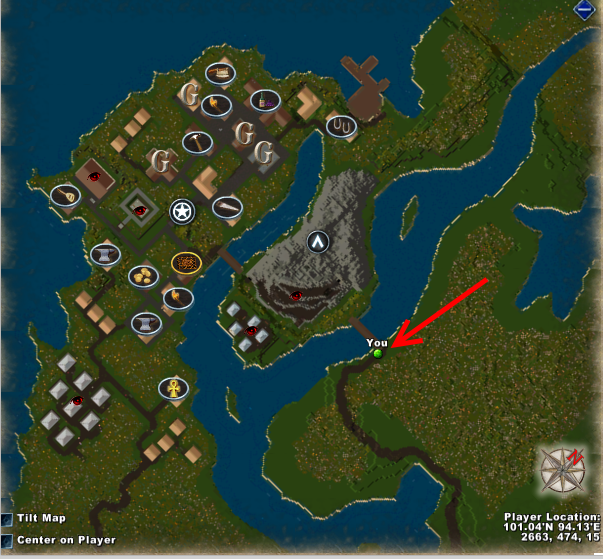 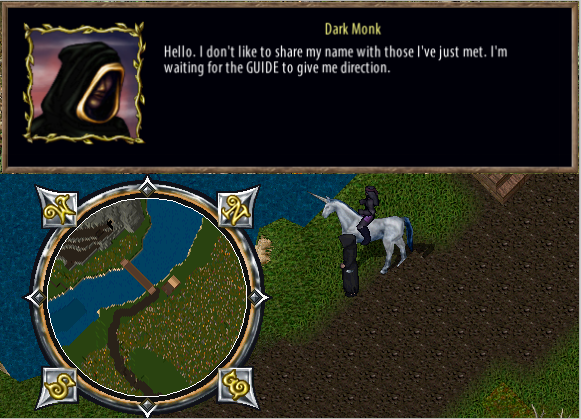 A seemingly dead-end, as there doesn't appear to be anymore keywords to try.

However, this is where your detective skills will kick in and knowing that this Dark Monk may be involved with citizens vanishing, you should start questioning him about those missing people.

So where do you go from here? You know this Dark Monk is responsible for abducting citizens.

If you remember your conversation with Merida, she claims she saw Meer and Juka with them.

Talking to the Meer and Juka could possibly help bring light to what is going on.

You can choose to return to Jaana the Druid at the Yew Abbey and find out more information based on what you've learned so far.

Head to the Meer Village of Lakeshire Mireg in Ilshenar, North of the Sacrifice Moongate, and find an NPC named Dasha: 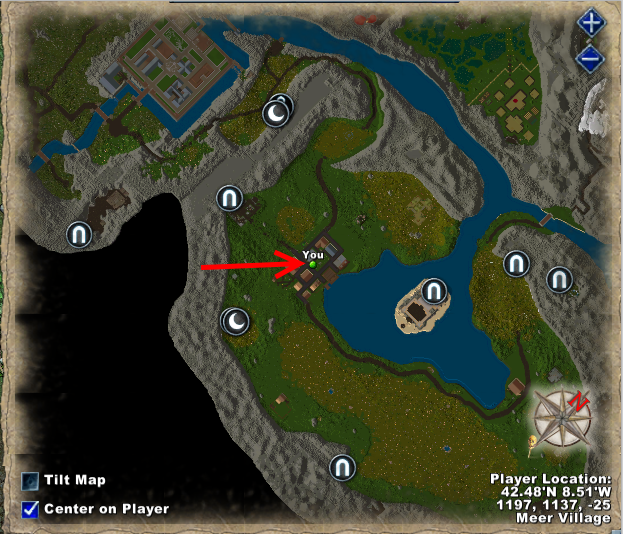 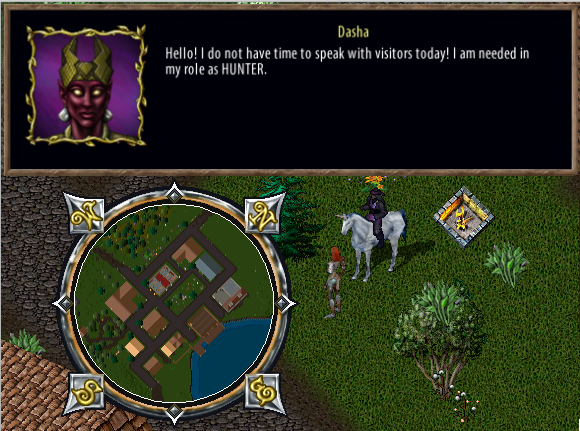 Keywords from conversations with previous NPCs (alternate ways to start the conversation):

You learn quite a bit from Dasha. She mentions a gathering occurring at the former Juka Fortress.

Head to the Juka Village of Mistas, North of the Honesty Moongate in Ilshenar, to find the NPC Shirron Argahrok: 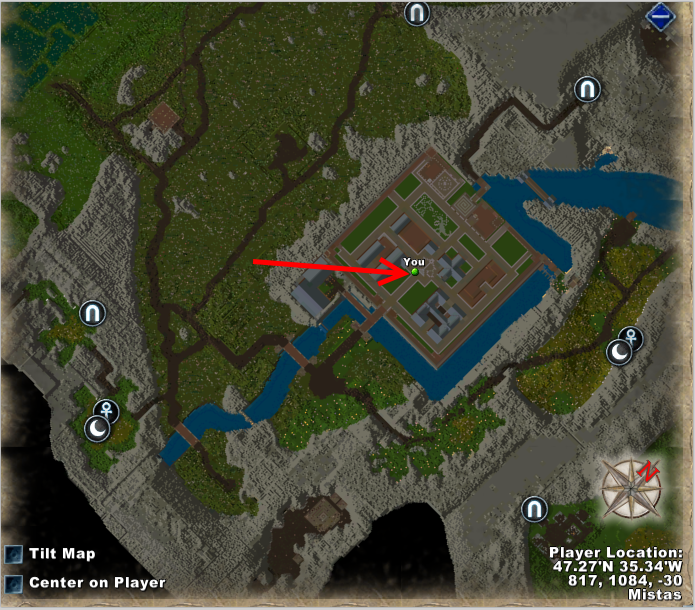 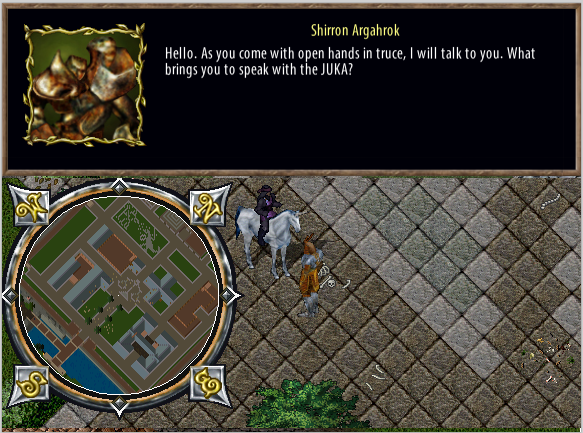 Both Dasha of the Meer and Shirron Argahrok of the Juka reference the old Juka Fortress in Ilshenar.

Head to the collapsed Juka Fortress in Ilshenar: 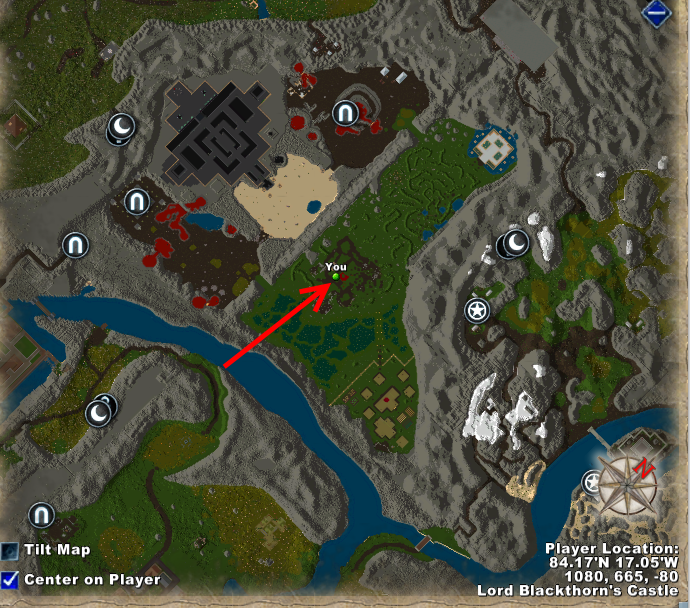 You will discover several NPCs and a most horrific scene: 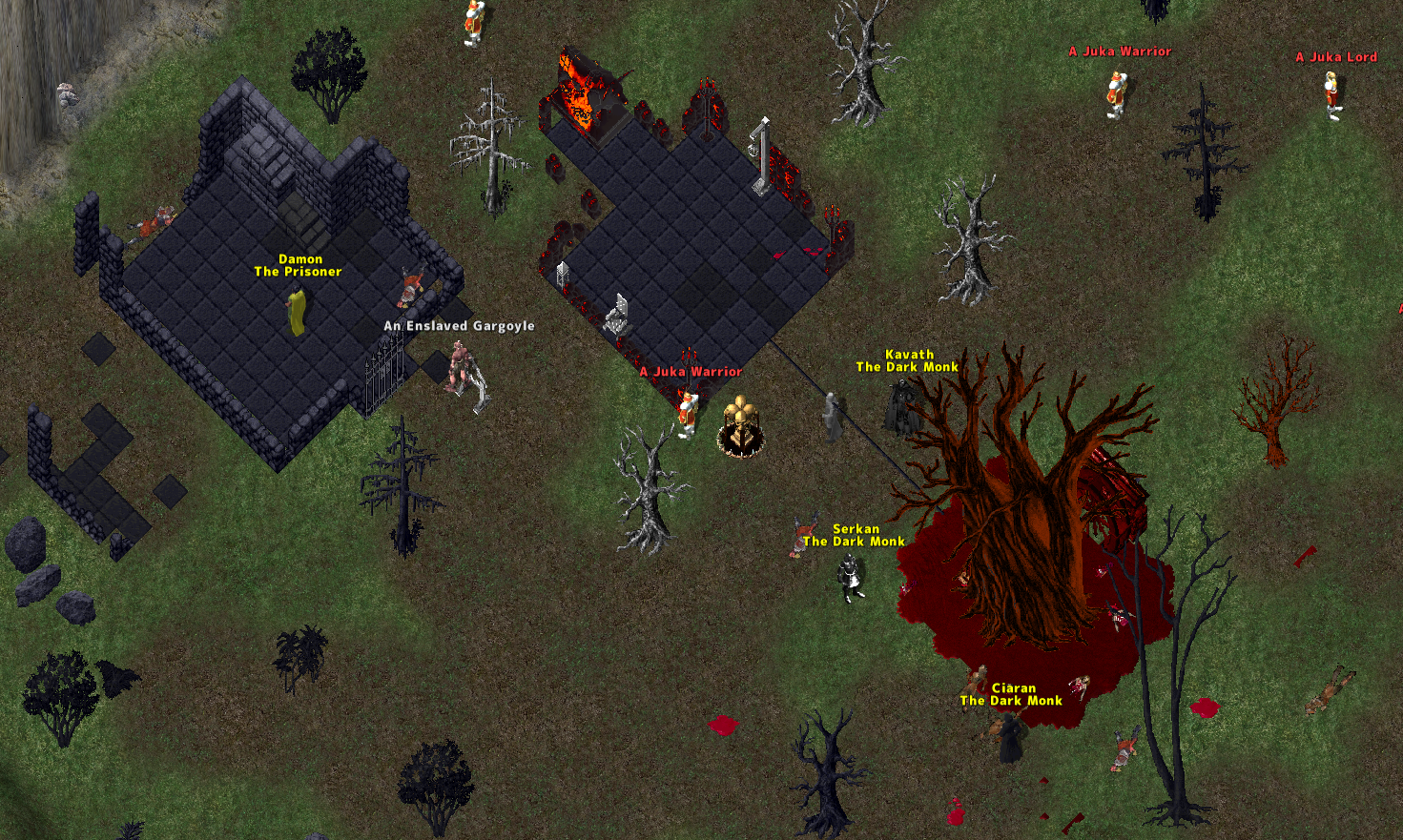 There are several Dark Monk NPCs here to talk to.

You may also notice Damon in the prison cell, Merida's missing Brother that she mentioned. 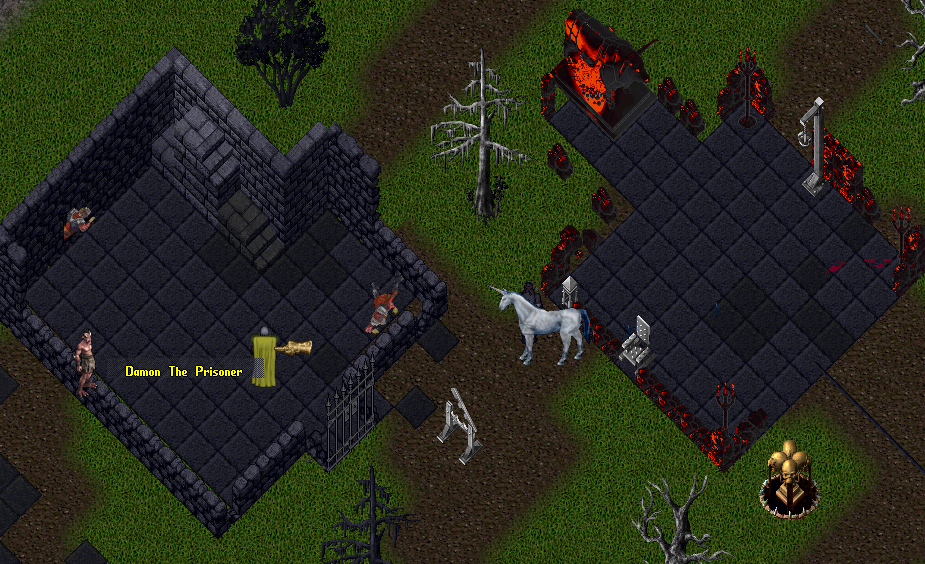 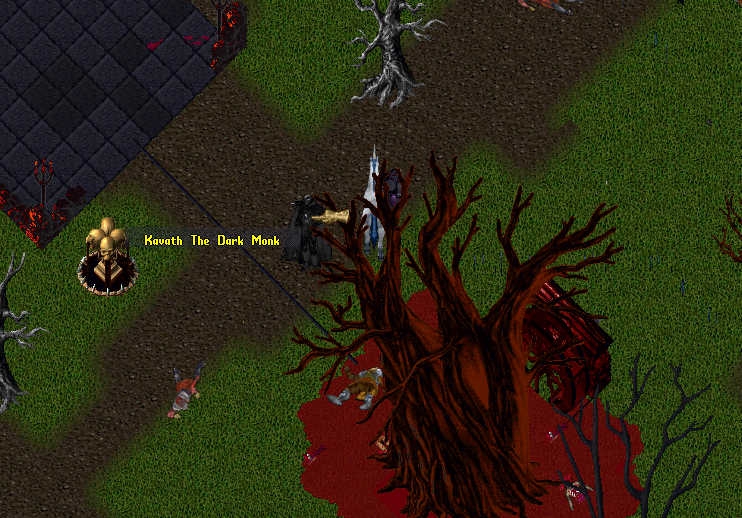 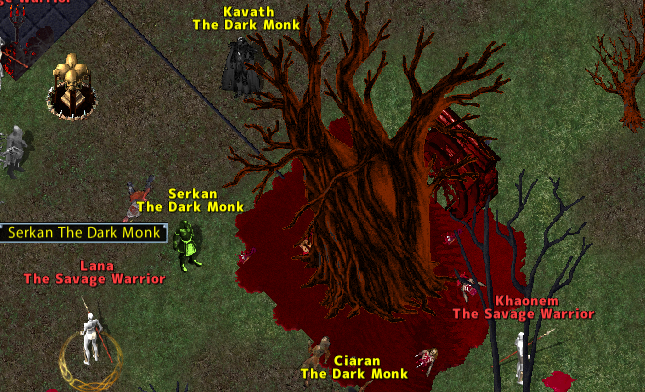 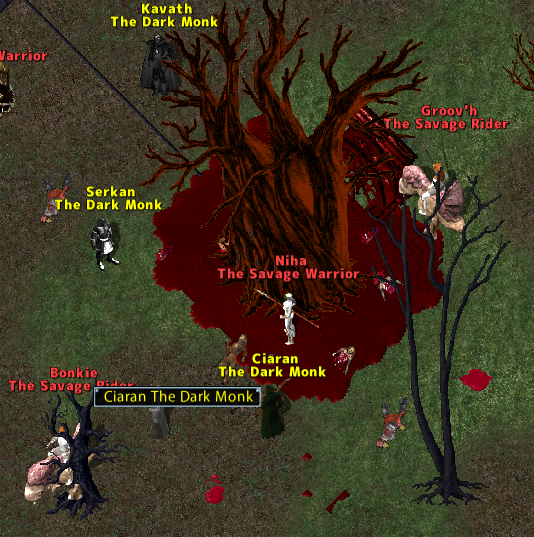 You can choose to return to Jaana the Druid and tell her of your discovery.

Thus concludes the Oracle Quest for this event. It is not required to complete it, but it has great story elements to it.

Depending on your timing, you may notice that a new Champion Spawn is right next to the Juka Fortress and the Blood Tree.

The champion spawn is located near the Ruined Juka Fortress in Ilshenar.

The fastest way to the spawn is from the Gypsy Caravan tunnel.

Run from the Compassion Moongate, or say "Ilshenar Mint" at a Crystal Portal. 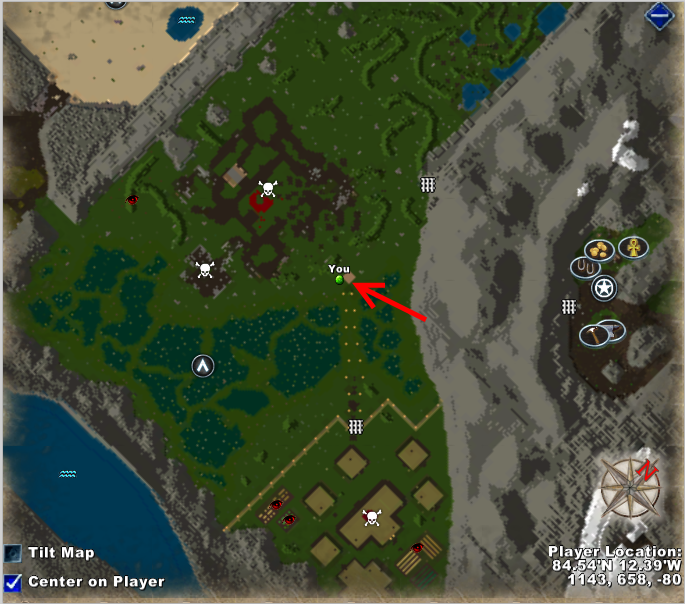 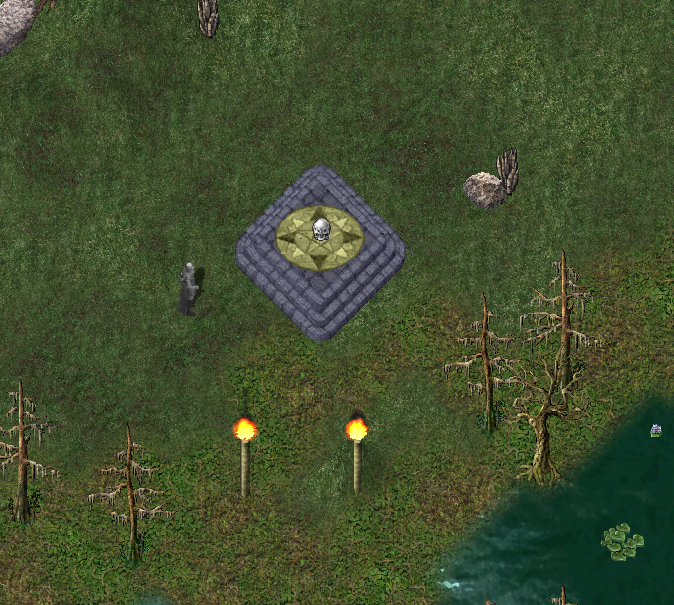 The first aid belt is rewarded to the top contributors during the fight with The Guide champion boss.

It is a guaranteed drop and is limited to 1 per account per shard.

Monster Statues are rewarded during the waves of the champion spawn, and fall directly into your backpack.

They come in 4 different styles, spanning at least 8 different hues. They act as a dartboard or archery butt when used.