So you've come back to the Ultima Online and you heard of the wonderful world of Animal Training, where the Animal Tamer can take their pets and train their pets into powerful fighting companions

Or perhaps you have never played an Animal Tamer before and want to learn more about Advanced Animal Training.

The only problem is, you don't even know where to start.  This is a guide to get you moving in the right direction.

Advanced Animal Training for Animal Tamers is a feature added to Ultima Online Publish 97 that allows you to Level Up your pet in order to increase its Attributes, Stats, Skills, and Abilities.

Each time you "Level Up" a pet, it will increase in control slots and taming difficulty, up to 5 pet slots and 108 Taming Requirement (for most pets).

To begin lore your pet with the Animal Lore skill and find the new section at the bottom for Animal Training. Click on the blue button in this new section to begin leveling your animal. 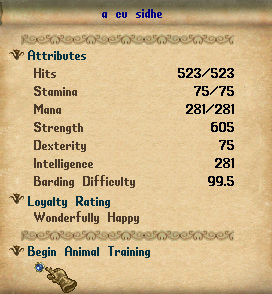 Once you do that you will get a red status bar with a percent shown.  This is the progress your pet has made into its current level. You will now need to fight mobs to progress the bar in order to level your pet. 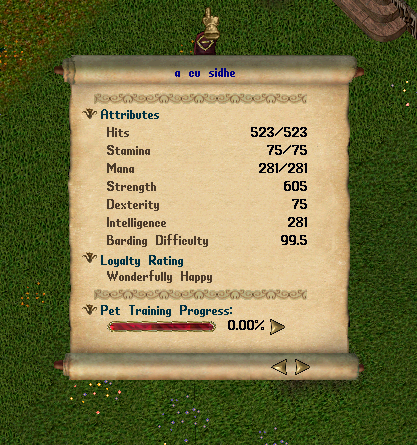 Fighting mobs will give your pet either "slightly", "fairly" or "greatly" gains.

Training can be progressed through normal hunting, albeit it slowly. Normal hunting for the most part gives "slightly" gains.

If you want to fast track your animals, then it is suggested you hunt a monster that will give "greatly" gains.  These monsters are stronger in power than normal mobs, but they will help you level your pet very fast.

The fastest gains from these mobs is done when your pet is doing the tanking.  Tanking means your pet has the "attention" of the mob and is taking direct melee damage from it. If it's attacking while another animal is tanking, gains will be much slower. This is because your pet can gain training both when it hits a mob, and when it takes damage. 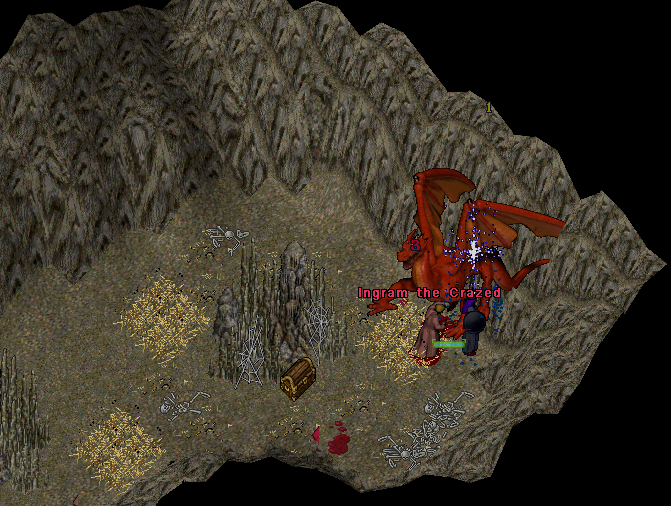 Located on level five of shame, this is probably the most used animal training spot.

These mages do very little melee damage, but can pack a punch with their magery spells. You will either need a pet with decent fire resist to train here, or to carefully watch your pet and heal/vet it as it takes damage. 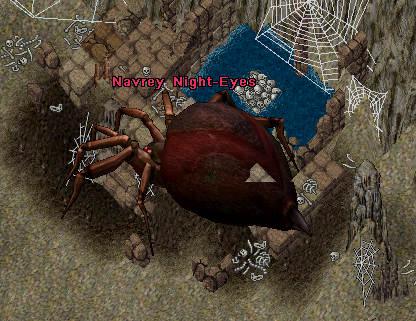 Navrey Night-Eyes is a giant spider located in The Underworld. She does high melee damage, poisons, and can "web" (teleport) you or your pet away from the fight during combat. Use caution (or some friends) when leveling your pet here.

The easiest way to get to Navrey is to ask in general chat on your shard where the Navrey hole is.  It will be located in a player house (most likely) on the Ter-Mur facet, and the hole will lead directly into Navrey's chamber.

Navrey also has a chance to drop the very useful Tangle apron, which can upwards of 10+ million gold. 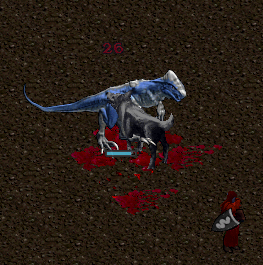 An Allosaurus is another very popular animal to train on.  3 different Allosaurus can spawn at a time in the Eodon dinosaur area between the Urali and Sakkhra villages, making it very convenient to power through levels with ease.

These guys hit very hard and very fast. You will want decent Physical and Poison resists to train here, and you will most likely need to Heal and Vet your pet.

You do not want to go into the Dinosaur Jungle to train on an Allosaurus, but rather you want to tell your pet to stay in one of the villages, then run in while mounted (or have a friend help out) and lure an Allosaurus out of the Jungle to one of the bridges near the Urali or Sakkhra villages. This is a much safer place to train as it will prevent additional Dinosaurs from engaging you. 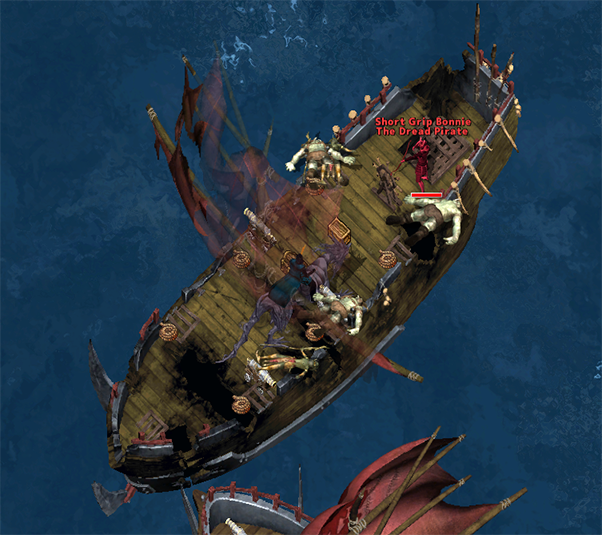 Dread Pirates are a great way to train your pet as there are plenty of them in the water at anytime, so you don't have to worry about other people being at the Crazed Mage or Allosaurus'.

To get a Dread Pirate, you need to sail around the ocean and look for a pirate ship. Once you find a pirate ship, scuttle it with your ship so it can be boarded. You want to eliminate the Orc crew and leave the Dread Pirate alive.

Board the ship with your pet in tow and tell it to attack the pirate. Dread Pirates have very high Hit Point Regeneration, so if it looks like you may kill the pirate before you finish leveling, simply go back to your ship and wait a few minutes for the pirate to regenerate his health.

Dread Pirates have the potential to hit very hard with their bows, so make sure your pet has good physical resistance or you are ready to heal/vet as needed.

Cavern of the Discarded 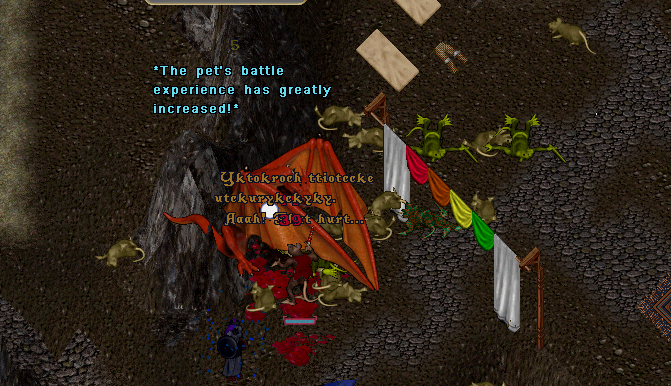 To get to these Mini Champ bosses you first need to advance the spawn to the end.  This can take some time. Also while you are leveling on the boss, additional mobs will spawn. 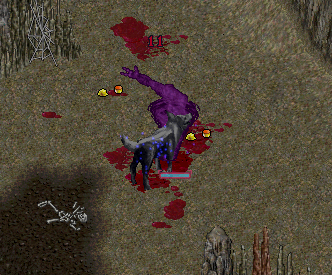 Located to the west of the crazed mages you will typically find up to 3 Unbound Energy Vortex (UEV) mobs.

These mobs are 100% energy damage and hit decently hard, so you will want to make sure to have a pet has a fair amount of energy damage before leveling a pet here.

These can be useful if your pet needs a little more % and the Crazed Mage is busy/dead.

Depending on your pet's current control slot, it will need 1 to 4 mobs that give "Greatly" gains to complete a full level.

See the chart below to know how many mobs you will need to fight for each level.

"Max Gains Per Mob" is the maximum Level % your pet can gain on a "Greatly" mob at that control slot. It does not matter where your pet starts, it will not gain more than the % listed (with the exception of Pet Power Hour, which doesn't make a difference in required mobs, so we will not go into the details of that here).

If your pet is 4 control slots and 0% leveled, it will stop receiving gains at 25% on a single mob.

If your pet is 4 control slots and 13% leveled, it will stop receiving gains at 38% on a single mob.

Once you reach 100% on your status bar, you are actually ready to begin animal training point allocation.