There is a post on uo.com (https://uo.com/2022/03/23/spring-fever-live-on-all-shards/) that indicates we should check out the Town Cryer for more information, so let's do just that! 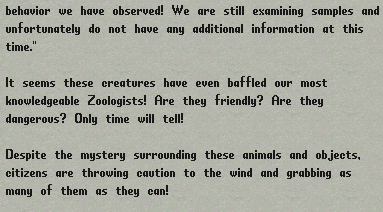 Let's go visit the Moonglow Zoo and see if we can discover anything more.

Looks like some new decorations and a new NPC are here! 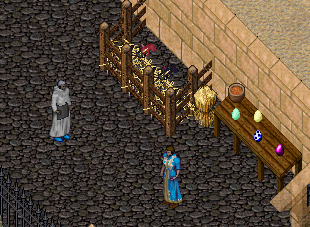 Remember the rules about Oracles, be polite and try greeting them! (They usually respond to 'Greetings' or their name).

Oracle conversations can be progressed by repeating the CAPITAL words in the dialog.

This conversation has 2 paths, let's go with 'Studying' first.

Looks like this is the end of this conversation path... or is it?

Let's go down the other path real quick:

Aha! We should go see Karl in Skara Brae.

However, it sounds like she would like to see one of these colorful eggs if we find one. Maybe we should try giving her one.

Sounds like we have 2 people to see. Karl in Skara Brae, and Noreen in New Magincia.

Looks like we have some Ranger Scouts to track down. Time to search North down the road! 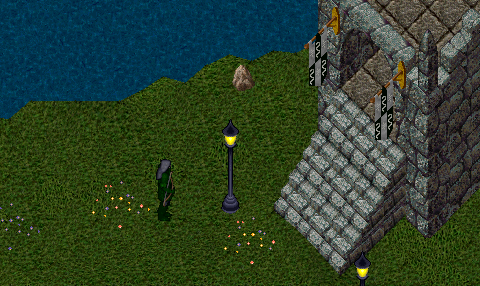 Severina can be found far down the road North. Take the fork to the East towards Minoc and find her near the Yew Training Tower.

At this point we discover the champion spawn located in the mountains of Wind.

Let us deal with this spawn and then search to see if anyone near Wind knows what is going on.

Zeddicus The Mage of Wind 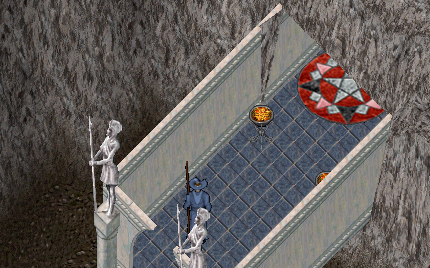 Zeddicus can be found just inside the entrance tunnel of Wind.

Looks like Zeddicus would like to see one of those eggs as well. Let's see what he thinks of it.

Ut oh, not Relvinian again. For those unaware, his old workshop is located within the Hedge Maze. Let's go investigate.

Within the Hege Maze, you will find an area littered with strange colored mushrooms.

In the center of the mass is a GIANT glowing mushroom. 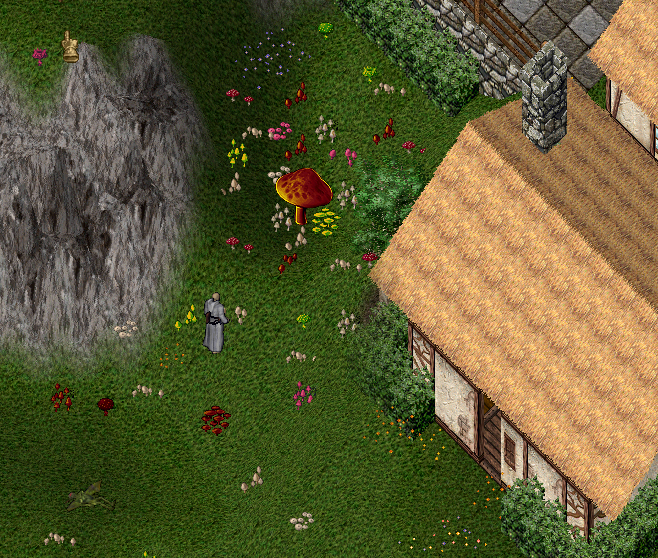 Double-clicking on the mushroom gives us an item

Double-clicking the item gives us a clue! 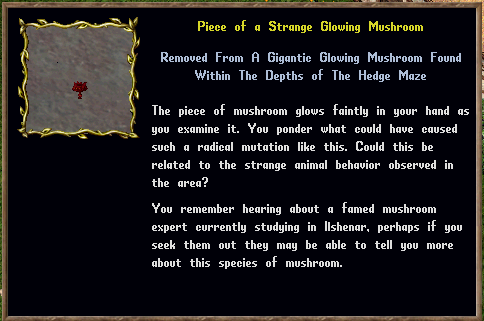 Looks like we should try and find this mushroom expert somewhere in Ilshenar. 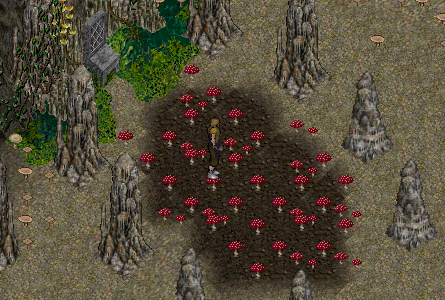 What better of a place for a mushroom expert to be than the Mushroom Caves in Ilshenar?

Well, he asked! So let's show him the mushroom we found.

He doesn't respond to LELAND, but if we read his text he indicates we should use that with Varioso at the Lycaeum. 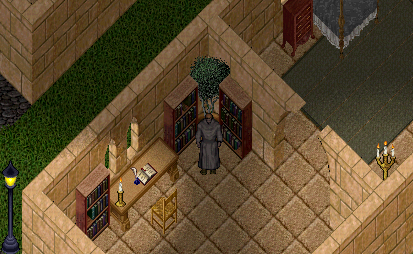 Varioso can be found at the Moonglow Lycaeum, way in the back studying in one of the rooms.

Sounds like he wants to see the mushroom too, so let's show him.

Varioso wants us to find Ranger Scouts that were dispatched to the Southern mountainous ranges on the mainland. Could that be Mount Dragonhame? Let's search around and see what we find.

Wolstan can be found in the forest just outside the entrance to Destard Dungeon.

Hmm, this is not good. Fey creatures entering Destard? Collusion with the Dragons? We better prepare ourselves as Wolstan asks. We may be called upon at any time!

Eggs have been found in the following base types:

Eggs can be found overland in Trammel, Felucca, The Lost Lands, Tokuno and Malas.

Quest 1: The Lepidopterist, located in the NW corner of the hedge maze 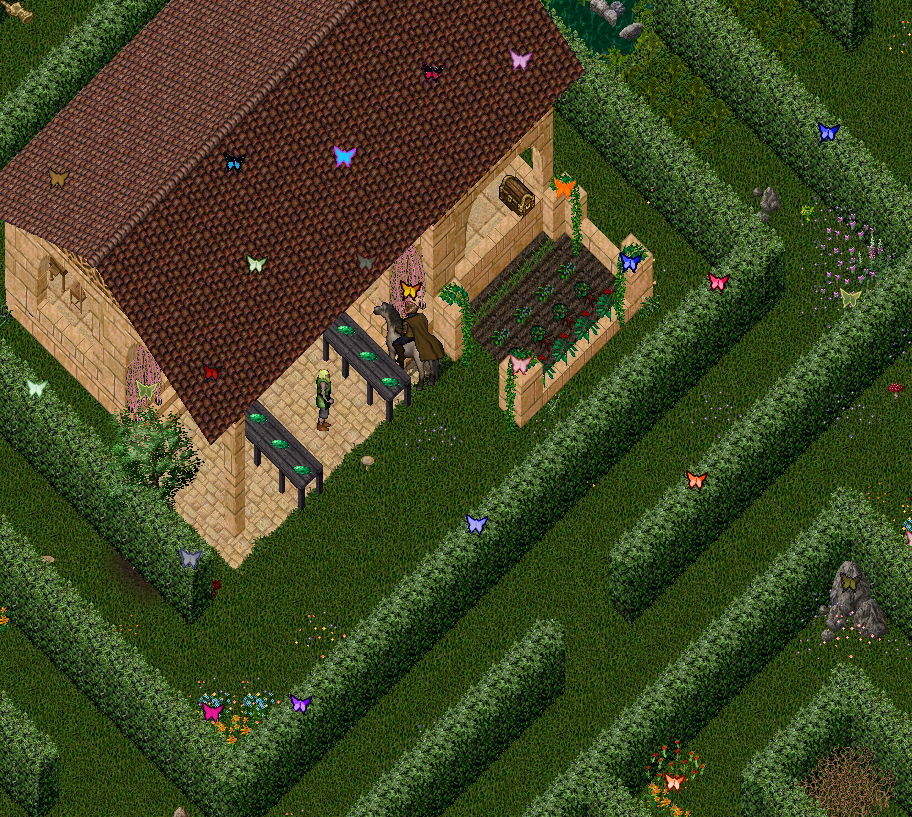 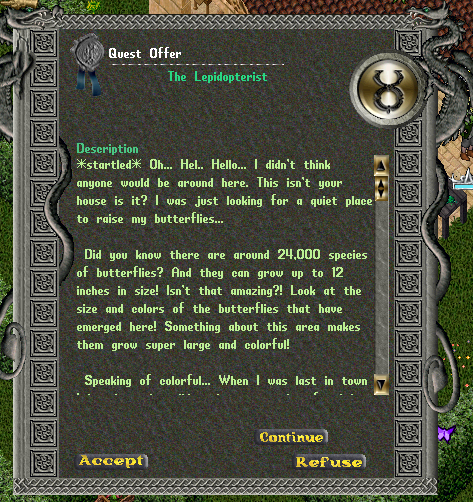 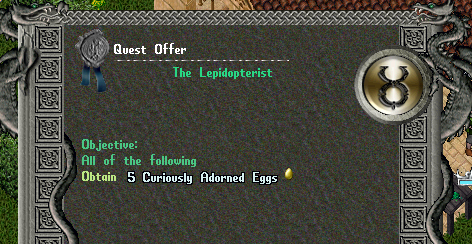 Completing the quest you will receive:

Clicking on the Chrysalis and you will receive a butterfly, makes a flutter sound when clicked on. 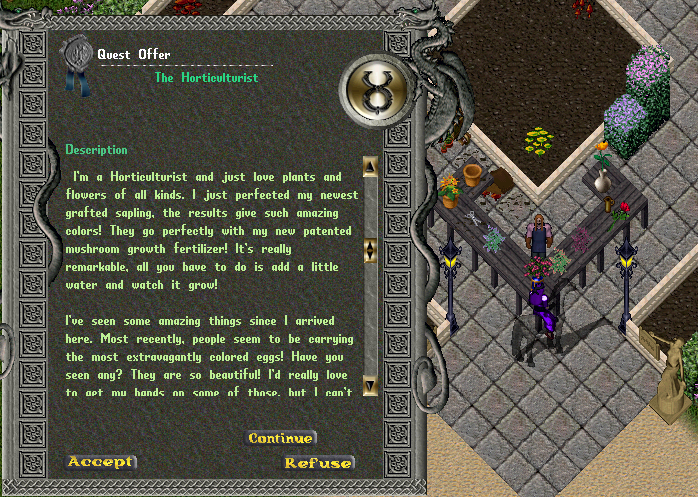 Use a pitcher of water on the sapling to make it grow into a full hedge.

Quest 3:  The Eodonian Parrot Breeder (west of the Eodon Moongate) 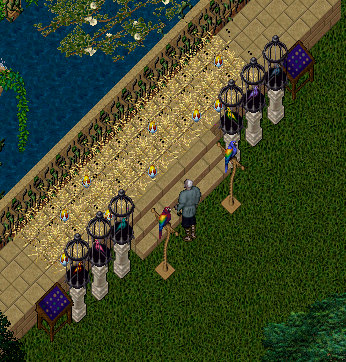 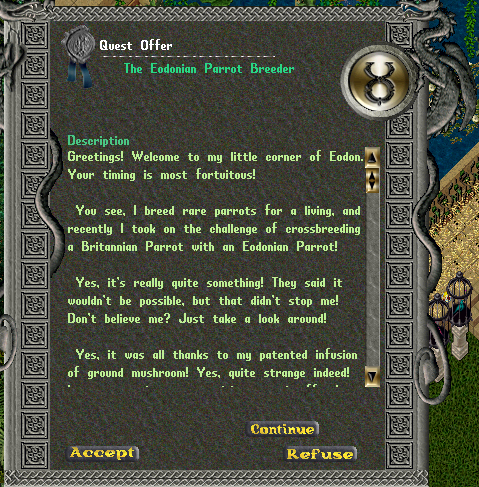 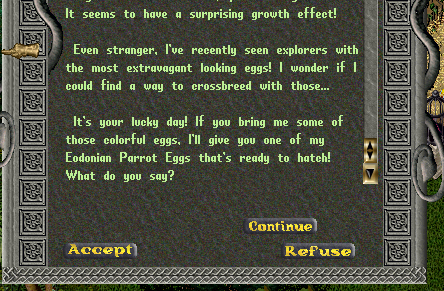 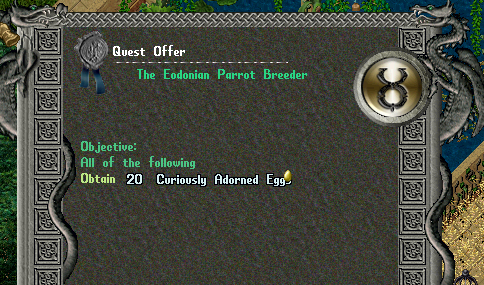 When you click on the parrot you hear the parrot say "hello" and then you receive a new colored parrot. 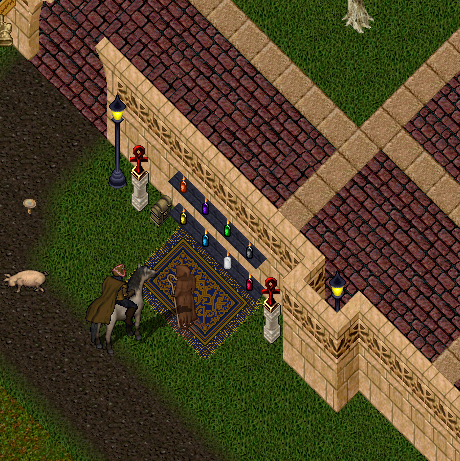 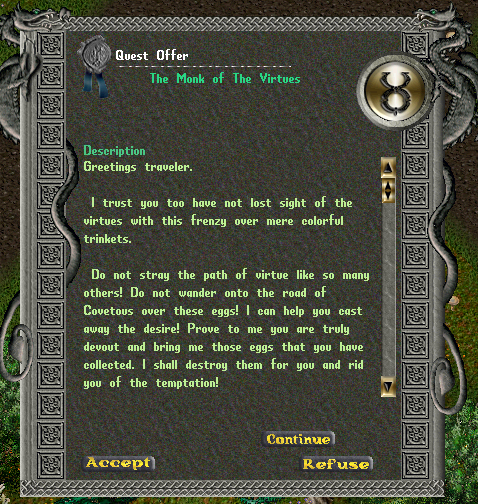 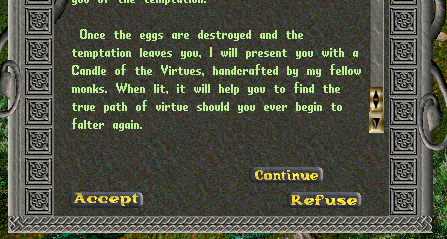 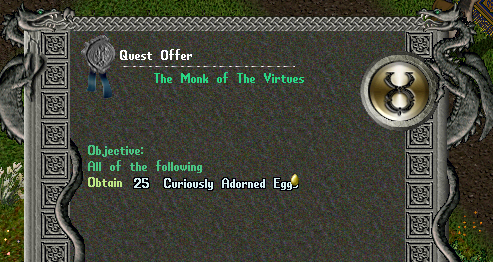 Rabbits and Jack Rabbits can spawn in various colors.

The Totem of Chromatic Fortune from the UO Store works to increase your chance at a rare spawn! 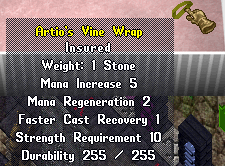 To find out where it is follow the new Town Crier Oracle Chain. :)

Hint: If you are stuck, try being polite to the Oracles and say "Greetings" to them. 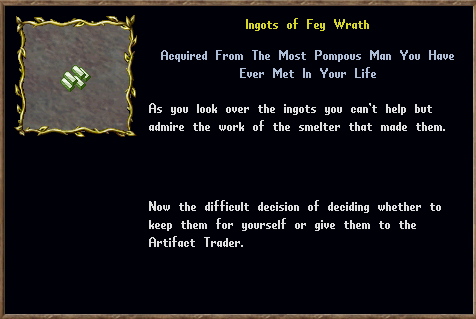